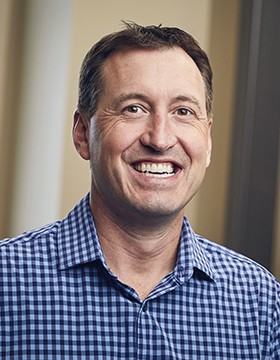 Jonathan has raised the standard of excellence at Marco since he joined the company in 1996 as a sales representative, after graduating from University of North Dakota. He quickly earned leadership roles in sales management. Jonathan became Vice President of Sales in 2012 and Chief Operating Officer in 2014.

If Jonathan chose a super power, he would want to fly. If Jonathan’s life was a book, it would be titled How to Build Teams of People who are Better Than You. If he worked at Marco, he would…oh wait…

Jonathan’s strategic leadership has helped Marco achieve consistently strong revenue and profit growth. He has been instrumental in promoting a high-performance culture and creating a place where people love to come to work. In fact, he’s inspired by progress and positive, empathetic people with a good sense of humor—sounds like his co-workers!

Who is Jonathan’s look-alike? The Spurs player Manu Ginobli, an underdog who has consistently won and been a great teammate. Jonathan also wins big at Marco and thinks it’s fun to work at a place where growth and professional development are expected.

Degree in Marketing from University of North Dakota, 1996

Marco Board Member, Casselton Park Board President, Chair of Board of Trustees for Jeremiah Program of Fargo-Moorhead, UND College of Business Advisory Council Member, drum player in the Martins Lutheran praise and worship band, NDSU Professional Sales Center Advisory Board.