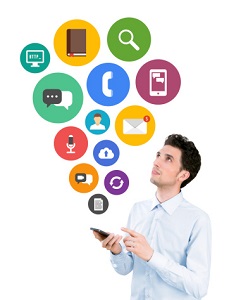 What most people might not realize is that the cloud has migrated into everyone’s life in some way, shape or form. Whether you realize it or not, you are using the cloud at least once a day for any number of services. The following are five commonly used cloud-based services that go un-realized by most users.

According to a report from IDC Research, 80% of smartphone users check their phone within 15 minutes of waking up each day. You can thank web-based email for this habit. Whether you use Gmail, Yahoo, Hotmail or another email application, you are relying upon the cloud to receive, send and store your email communications between friends, family and co-workers.

What is the next stop in the morning for the 80% of smartphone users rushing to their device when they wake up? You guessed it: Facebook. Social media, along with web-based email, is one of the largest and most-widely used cloud-based services, by people everywhere.

When people need to vent, connect with family across the country, share pictures of a recent family vacation, see what others are up to, waste time and more, social media is often the first place they go. Each time you post, comment or share on social media you are using a cloud-based service.

Skyhigh Networks has some insight into how your employees are spending their time; among the Top 10 cloud-based services accessed by employees in the workplace, Facebook was number one, with LinkedIn coming in fifth.

The ability to share files, whether they are work files shared across multiple devices, or personal music, photos and videos, is one of the most popular uses of the cloud. A picture taken on an Android smartphone and uploaded to a Google Drive account can then be accessed by multiple users on various devices.
The most popular examples of file-sharing services include Google Drive, Apple iCloud, Dropbox and Box.net.

This might be one of the most overlooked cloud-based services. Millions of people own iPads and iPhones, taking advantage of the built-in Facetime feature to make video calls with loved ones, friends and co-workers across the country and around the globe. Facetime, Skype, GoToMeeting and other video teleconferencing services are entirely cloud-based and they are heavily used in the workplace.

The list of cloud-based entertainment services is endless and in some respects these services have existed longer than the conversation about the cloud. Applications such as Netflix and Hulu have been streaming movies and television shows to your laptop or TV for years now, taking advantage of cloud technology in the process.

Other examples include Sony’s PlayStation Network and Microsoft’s Xbox Live. Gamers connect remotely to servers managed by Sony, Microsoft and game manufacturers/developers to compete with and against other gamers from the around the world on a daily basis.

You and the Cloud

As you can see, the cloud is a trend affecting many aspects of your life. Everyone relies on the cloud to some extent to communicate, share, relax and more throughout the day. Take a quick look at your daily routine, and you might realize just how vital the cloud is in your life.