Why You Should Upgrade Your Old Phone System

While younger generations have a strong preference for other communication tools, voice calls aren’t going away any time soon. However, those Plain Old Telephone Systems (POTS) that rely on analog copper phone lines are, and it’s already happening. In fact, many traditional phone companies are positioned to drop their POTS lines within five years.

If you haven't already upgraded your phone systems to match the digital age, you may be experiencing a number of issues. The following are some of the common issues facing older phone systems, as well as the best fix.

There is no single piece of technology built to last forever. If your office still uses older handsets (between 8 and 10 years old), it is likely that your phones are circuit-card-based rather than software-based like newer models. Components in circuit-card-based phones will start going bad as time passes. That’s annoying, but all things considered, eight to ten years is actually a pretty good shelf life for most office technology.

These are some of the most common issues that plague older phone systems:

These issues may be caused by phone room hardware or problems with the endpoints themselves. But no matter the root cause, these issues can certainly cause a lot of frustration and interfere with good communication. And you might be wondering if you’re better off fixing your old POTS systems or if you’re just throwing good money after bad.

Is Fixing Old Telephones Worth the Money?

The most common approach when older phones start malfunctioning is to simply apply a band-aid. Employees often decide to just put up with sticky buttons or use another phone in a quieter room if there are volume/static issues.

Most businesses opt to limp along for months or years, and according to the Communication Workers of America, many traditional phone companies are also ignoring needed repairs. It’s very expensive to keep maintaining those copper POTS lines, they’re less safe, and they’re also much slower to transmit data than fiber optic cable.

In order to get your system repaired, your business would probably need to call the dealer that originally sold the handsets. That dealer will arrange for a technician to visit your office, address the issues, and conduct repairs.

So to answer the question, not even POTS carriers are investing in repairing POTS technology. They’ve done the math for you and found that it’s just not worth it. According to a new FCC order, you’re going to have to upgrade your system soon anyway, and it’s best if you beat the rush.

Dealers like Marco work with renowned national brands to provide businesses with an affordable path to upgraded phone systems that are hosted in the cloud. You might think that the cost is prohibitive to buy new phone systems, but you'll probably enjoy significant cost savings with very little upfront investment.

Hosted Voice or Cloud VoIP are just two different ways of saying the same thing. But that’s where the complications really end. Most importantly, you’ll be able to save money…probably a lot of it. Data shows that the average organization that switches to Cloud Voice saves 90% on international calls, 75% on operational costs, and 40% on local calls. More importantly, as your business expands and contracts, you can add or remove lines and features in just a few clicks.

You’ll get to pay less while getting more. What’s not to like?

Upgrading your phone system is worth it just for the ROI you'll get from just the new features. Modern phone systems offer flexibility that your old phones simply cannot compete with. For example, softphones would be a perfect fit if your company has multiple small office locations and a smaller budget. A softphone is loaded onto your employee's desktop/laptop computers as a software program and places calls directly over their IP connection, saving money on handset installation and new wiring.

Of course, some companies may still prefer an on-premise solution. But by and large, hosted voice is the better option, as it gives even more flexibility, and it’s ideal for remote or hybrid workplaces and accommodating business travel.

But if you’re still wondering which communication technology would provide the most ROI for your organization, this free cloud communication guide compares hosted voice, UCaaS, and on-premise solutions. It also includes steps to assess your current business communication to steer you in the right direction. 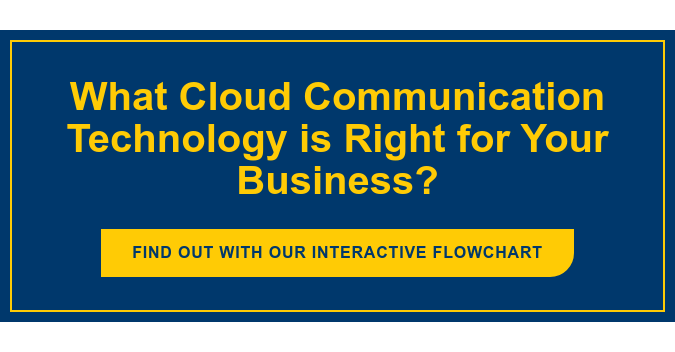