A Brief History of the Office Photocopy Machine 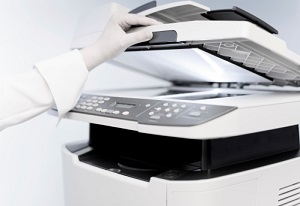 We often take our technology for granted. Think about it – when was the last time you stood beside your office copier and thought about how amazing it was that the machine could scan a document, then print out hundreds or thousands of copies of that same document with virtually no errors? It hasn’t always been this way.

Back in 1780, James Watt, inventor of the modern steam engine, managed to design the book press, also known as the copying press. Essentially, someone would write a document in special ink, set a moistened sheet of translucent paper on the surface of the document, then use the copying press to squeeze the two sheets of paper together. The end result was that ink would lift from the first sheet and copy onto the second sheet. Unfortunately, this came with a limitation – you could only copy a document once – twice if you were lucky – before you had to rewrite it again. In the modern office, that'd be the equivalent of typing out a document, printing it twice, then typing it out again.

The book press led to the first modern copying machines that you'd find in high-rise offices. In 1950, 3M developed the Thermo-Fax. Thermo-Fax worked on a similar principle – an infrared light would shine through your original document, a second sheet of paper coated with heat-sensitive chemicals would react to the light and transfer the image. Secretaries and other file clerks were now able to more quickly duplicate documents, but there were still major problems. The chemical paper was expensive, it smelled bad, and the copies would curl into tubes. Still, the ability to make copies was better than the alternative – retyping or rewriting everything out by hand.

Things changed permanently in 1959, when Xerox Corporation presented the first office copier, known as the Haloid Xerox 914. The machine was an incredible breakthrough; it was the first piece of technology capable of making duplicates on ordinary paper, without the reliance on special chemicals. But it wasn’t always smooth sailing.

One Unlikely Inventor & One Business Man

Chester Carlson, a poor patent attorney who struggled through junior college, developed the process of xerography in 1937, without the help of a team or much in the way of financing. This process alone wasn’t enough to change the way businesses operated.

Joseph C. Wilson came along and named this process xerography, after the Greek words for “dry” and “writing.” He began offering the technology to major corporations, including Eastman Kodak and IBM, with no success. Every door was shut in his face and few took him or his technology seriously.

The Partnership that Changed Everything

In 1947, Wilson noted the importance of Carlson's invention and the two teamed up to develop the Xerox 914, which has the reputation of being the single most successful product introduction of all-time. By 1965, Xerox had over $500 million in revenue. In 2013, the world produced an incredible three trillion xerographic copies.

It's easy to forget what a difference technology makes in our everyday lives – if it wasn't for the invention of the modern office copier, you could easily be spending your time working with chemical copies, or worse, writing or typing multiple copies of needed documents. So the next time you're tapping your foot and waiting for the copier to finish doing its job, just remember this machine’s history, and be grateful for the speed, accuracy and additional features it provides to enhance your productivity.

But, if your office photocopy machine is causing more problems than necessary, it may be time to meet with a Copier & Printer specialist to define and implement the technology that accommodates the productivity your business requires.