On a daily basis, Marco tech experts put their vast technology knowledge and skills to use. They are well versed in a variety of areas – from toner, to print software, to connectivity and the cloud, and beyond. But after a day in the office or on-site with customers, many of our tech experts leave work to do a wide variety of other activities. Read on to get to know a few of them (and their hidden talents)…

In his free time, Copier/Printer Field Service Manager Bill Steen loves curling. He got started with curling in 2002 when his twin brother took him to an ice sheet one Saturday. As soon as he played his first game, he was hooked. Bill enjoys that curling is both an individual and team sport. You need the help and support of those on your team, but your individual performance is important. He also likes the strategizing and chatter involved.

Bill currently curls on a weekly basis with his league team. His team is packed with many friends – both old and new. Because the league is semi-competitive, there are some players who are aiming to play in the Olympics someday. He also participates in Bonspiel – a big curling tournament held once a year at the Lakes Curling Club in Detroit Lakes.

As Bill explains it, curling is “a family sport” and “a lifelong game.”

In Bill’s words, “the best way to get a broom in a man’s hands is to put him on a curling sheet.”

When we asked Production Print Support Specialist Mary Tonnell to tell us about her passion outside of work, she indulged us,

“I ride motorcycle – yep I’m a Biker. I own my own Harley Davidson. Pearl-White in color, 2006 883L Sportster (customized - to fit my short legs), including saddlebags and a windshield. I’m smiling now just thinking about it.”

Mary has been a fan of Harley Davidson Motorcycles since she was a little girl. She grew up with three older brothers that tinkered with go-carts, mini-bikes and other small engines, who all eventually ended up getting Harley motorcycles of their own. It was just part of her growing up and she never lost her admiration for a Harley.

Up until two years ago, Mary had never owned her own bike and was a bit envious of her brothers and their wives who now were riding as passengers. Because her husband does not ride and really had no interest in motorcycles, it wasn’t something that she could justify purchasing. So when she received her Harley as a surprise birthday gift from her husband, she was shocked. She says, “It is and has been the best gift ever!!!” She loves every minute of it. 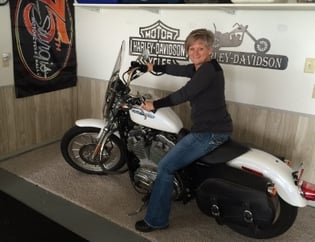 Mary particularly enjoys an early morning ride on the weekends. There’s something about the peaceful, quiet countryside, fresh morning air, lack of traffic, the sound of the engine and feel of the heavy metal that she can call her own. She explains, “Polishing my bike when I get back home after a ride, looking at how it shines and noting how many miles I went... It’s indescribable.”

When it comes to her Harley, Mary is the wrench turner on her bike. Along with reading the manual, advice from other riders and Harley Forums online, she changes oil, checks and changes spark plugs, attaches the battery tender and does regular preventative maintenance to the engine. Mary also promised her family that she would not ride without a helmet, for reasons we all read about in the paper. Safety first!

Steve Knutson, Marco’s Chief Technology Officer, is currently restoring his fifth mustang. It’s a 1965 convertible. He grew up with a group of guys who all loved cars. Every day they’d get together at a friend’s house and work on them. The very first car he ever built was a 1965 VW. It was his dad’s car which he bought from him for $200. After he bought the car, Steve took it apart and built a dune buggy. Of course his dad thought he was crazy, since the VW worked just fine when he bought it from him.

Why does he love to take apart, restore and rebuild cars? Steve loves working with his hands. Plus, it’s a great project to work on indoors during long Minnesota winters. It has become a family hobby that he enjoys with his two sons. Every now and then, he enters his work in car shows (including the Marco Car Show) and loves seeing how many other people have a passion for cars like he does.

Just like Steve’s mustangs, there’s a lot more “under the hood” of our tech experts. But the energy, passion and dedication they apply to their hobbies follows them into the office every day. Our tech experts find the same joy and satisfaction in their work with Marco customers as they do curling, riding, restoring and everything else they do in their free time.