As I covered last month, the Marco Gold Standard has four pillars: client satisfaction, vendor partnerships, community support and employee engagement. These pillars work together to help Marco maintain a strong culture, especially during times of growth and change. Today, I’ll be discussing the pillar of community support in greater detail.

Community Support as a Gold Standard

An essential component of our community support pillar is to remain committed to giving back to the communities we serve. We support community initiatives through donations and corporate sponsorship, and we also support our employees in volunteering.

In 2017, Marco employees volunteered over 9,000 hours on company time. In that same year, we donated to 238 nonprofits – this included nonprofits within all of the regions where our 48 locations are located.

Here is a sampling of the causes and programs we support as part of our commitment to community...

Marco has been a contributor to the United Way since the company was founded in 1973, and we’ve been doing fundraising campaigns for 30+ years. For the United Way, we hold a week-long campaign in the summer, a winter fundraiser (last year we gave away a 65” Sony TV) and a peer appreciation day in the spring. For all of these events, all of the dollars earned go toward the United Way. Also, employee contributions do go back to support the United Way in their individual communities. 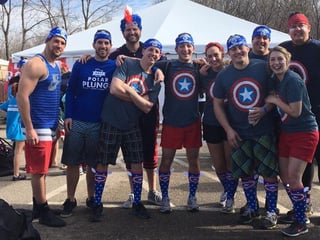 A little less than a month ago, 15+ Marco employees participated in the Polar Plunge at Prior Lake. They were members of a team called Chase Warriors, and their involvement was organized by one Marco employee: Jason Boutwell. Jason began participating in the Polar Plunge four years ago as a way to support and honor his close friends whose child, Chase, suffered an anoxic brain injury in 2013.

Four years later and he’s still jumping with his friends, the Lykken family and a large group of co-workers. All in support of the Special Olympics and the Chase Warrior Foundation.

Our charitable giving program is another way we encourage our employees to support their local communities. In each of our regions, any Marco employee can request corporate donations for charities they’re personally involved with. We want our employees to know that if they’re committed to a nonprofit in their community, we want to help support it. Plus, it gives us the opportunity to learn about new charities throughout the regions we serve.

Whether it’s through corporate gifts, sponsorships or employee time and contributions, Marco remains dedicated to community support throughout all of its regions. It’s part of our company, our culture and our Gold Standard.