A New Voice for the Community | Beyond Business IT, Worthington, MN

On Tuesday, November 4th, the city of Worthington, MN experienced a change. Mike Kuhle, one of the three mayoral candidates, was elected as the new mayor of Worthington.

After a long campaign process, Mike sat with family and friends at the Elks Lodge, watching the votes come in. When his win was solidified, although he could breathe easier, he didn’t relax. He knew there was work to be done, and the Worthington community was now relying on him to make things happen.

One of Our Own 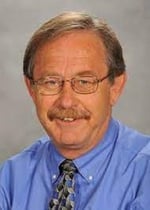 Mike Kuhle has been an important part of the Marco team, and even more specifically the Worthington team – and we couldn’t be more proud of his win in the Worthington mayoral election! Community involvement is held in high regards at Marco – and we tip our hat to Mike as he begins his role as mayor.

We believe it’s not enough for a business to do well; it must also do “good.” On the job and off, Marco is made up of people who care. So, let’s take some time to get to know Mike, and how he “does good” and will continue to, for the Worthington community.

Q: How did you end up in Worthington, MN?

A: Prior to moving to Worthington I was living and working in Sioux Falls, SD at JCPenney. One day my wife was offered a job in Worthington; so, I began to look for work there. And, we’ve been there ever since. I began working at Davis Typewriter Company and worked in sales there for over 30 years.

Q: How did you get started at Marco?

Q: What is your position at Marco?

A: After Marco acquired Davis Typewriter Company, I transitioned to being a territory sales rep. I now have a territory, primarily in Iowa, with two counties in Minnesota. It’s worked out well – I enjoy meeting and working with customers and traveling the area.

Q: Why did you decide to run for mayor of Worthington, MN?

A: Well, I’ve been on the city council for the past eight years. I felt my council seat needed to change and one of my goals had always been to run for mayor of Worthington, so the time was right. And, I like doing public service.

Q: What does this role as mayor entail?

A: In Worthington we have a strong city council government and the mayor’s job is to conduct meetings, work with the different entities of Worthington to bring them together and work for economic development.

Q: What does it mean to you to be the mayor of Worthington?

A: It is really just sinking in now; but it is an incredible honor. We have a diverse city and I love doing public service. I love working on issues and bringing coalitions together for the betterment of Worthington.

Q: What goals do you have for the Worthington community?

A: Economic development – we have a mall that needs to be redeveloped and we need to bring in more retail businesses. We also need to do a better job of bringing our diverse community together and blending our neighborhoods. Worthington is a town of about 13,000 people and about 4,500 of them are minority. When I campaigned, I walked to every house in the community and I recognized our opportunity to do a better job of coming together and building a dynamic community.

Q: How has or how will Marco play a role in your position as Mayor?

A: I know I can call on upper management for advice and rely on the leadership to help provide ideas on how to move Worthington forward. Plus, my role and experience as technology advisor will help me in any technology matters with the city.

Business IT in Worthington, MN

Marco purchased Davis Typewriter in August of 2010, and this was our first presence in Worthington. In October of 2010 we opened a new office where our two salesmen and five technicians work (when they aren’t on the road visiting customers). This team offers the full range of business technology services to Worthington, MN and the surrounding area.

Some of Marco’s local customers include: