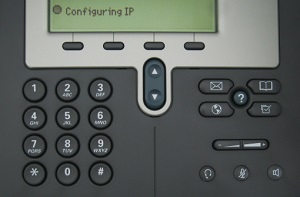 VoIP phones offer your employees the same look and feel as your traditional phone system. The phones used in a VoIP system are handsets with cradles and buttons just like other phones, but rather than connecting to the standard phone infrastructure, they connect your calls via Ethernet cables that carry the call over IP data networks.

Douglas Machine Inc. is an employee-owned company that opened its doors in Alexandria, Minnesota in 1964. The company specializes in manufacturing custom, semi-custom and standard packaging equipment. In 2009, the Director of Information Systems at Douglas Machine realized the time had come to upgrade the company’s aging phone system. Marco helped them realize the benefits of VoIP.

Your company is already paying for IP data services from your local Internet provider. Typically, the greatest benefit of VoIP is the cost savings your company will enjoy, allowing you to ditch the monthly fees and maintenance expenses related to a traditional phone system. In the process, you’re company will have more capital available to invest in its core processes in order to remain competitive in your industry.

VoIP phone systems are easy to integrate into your company and reduce apprehension about technological upgrades among your employees. At Douglas Machine, the adoption of a new VoIP system was quick and easy. All it took to bring their employees up to speed with VoIP was a two-week transition period that included training.

Last but not least, VoIP phone systems offer incredible scalability. Because VoIP systems connect via Internet Protocol and requires only an Ethernet cable to access the network, there is no need to run new telephone wiring or install new access points at workstations throughout the office. Douglas Machine added roughly 450 Cisco phones initially, 25% of which were Wi-Fi models. Those handsets met the company’s present needs, but allow Douglas Machine to easily upgrade in the future. Your company can add new handsets, remove them and adjust user access with just a few clicks of the mouse.

To talk with a specialist about a VoIP system for your business, request an assessment: