From left to right: Jeff Weber and Jake Vande Hey pose with Marco’s donation check before presenting it to CP.

“In 2012, we were asked to provide the phone system for the telethon. We said we’d love to be a part of it, since all the funding goes to a great cause,” said Jeff Weber, Marco Director of IT Service. Since 2012, Weber’s IT team has provided the phone system.

Each year, Marco staff members test the phones and dial numbers a few days beforehand to ensure the equipment works properly. The numbers, routing and calling must be seamless to help CP raise the most money across the 24-hour telethon.

“We take this event very seriously. We are a key part of CP’s ability to raise donations, and they are greatly appreciative of what we do,” Weber said.

Prior to the installation, Marco technicians completed the installation, labor, phone testing, licensing, cable management, etc. to ensure the system was ready. Marco’s in-kind donation for these services and the use of the phones totaled $13,830 this year.

“We installed 56 total phones, with 12 featured on stage for the inbound calling,” said Marco Voice Systems Technician David Mattern. He has worked on the telethon event for 13 years, and he added it is the longest running telethon in the nation at 65 years now.

On Sunday, March 3, the telethon went live at the WBAY TV Studios. Weber and Marco Sales Director Jake Vande Hey presented the donation check during the live show. They were in line with numerous other sponsors and donators, and the phones kept ringing.

Callie Sherman, CP’s Director of Philanthropy, explained what Marco’s donation meant to CP: “As the longest running local telethon in the nation, you can imagine how critical the phones, in addition to a long-standing, trusted partner, is to all that we do. Marco’s donation and ongoing support is a part of the backbone of the CP Telethon, and they have come to be known as a part of our CP family.”

Sherman added that the relationship with Marco is “trusted, reliable, and easy,” which assures her the telethon will be successful each year.

“Everything is based on dialing in for dollars to donate, and it was great fun to see,” said Weber. CP raised over $1.4 million at the telethon, and Marco is happy to support their success. 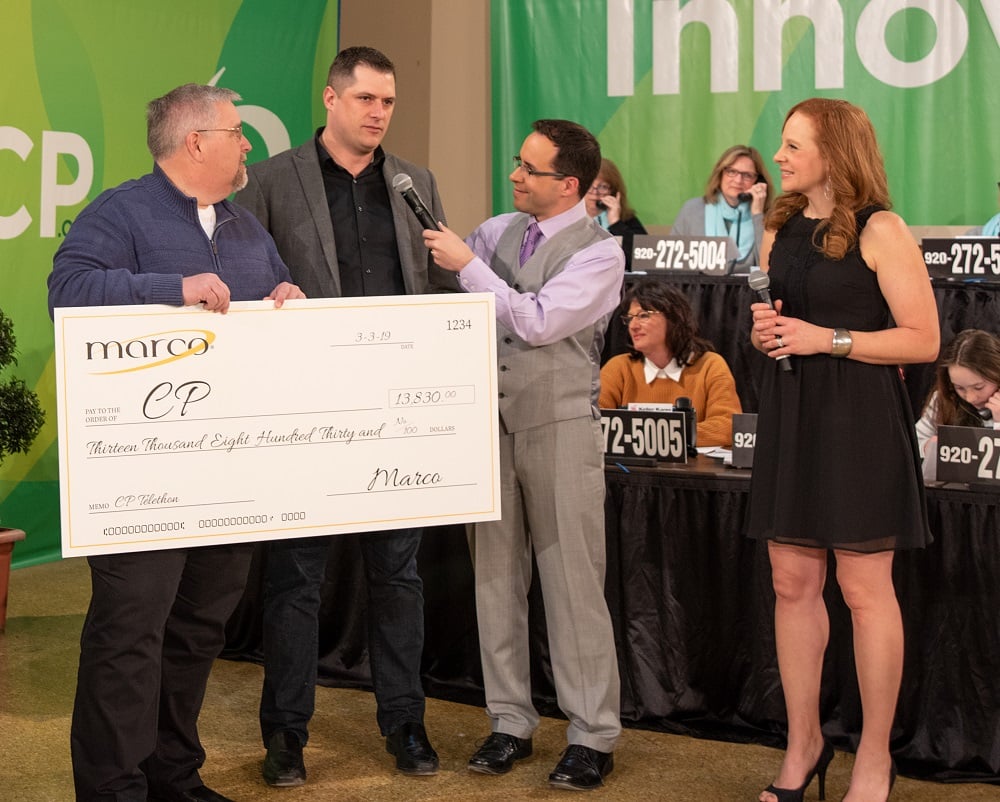