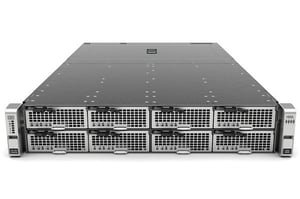 The expansion and wider adoption of cloud computing has led to explosive growth in the number of mobile and desktop devices accessing, sharing and storing information over the Internet. Businesses and employees are no longer constrained by wires and direct connections to the Internet. The expansion of Wi-Fi access points, and stronger mobile connections, have made it possible for people to access personal and professional data anywhere, anytime, on any number of devices. Cisco has recently unveiled a new line of servers, the UCS M-Series Modular Server, which can address the current and future needs of cloud applications and services that rely on highly parallelized workloads.

The Internet of Everything

The world of Internet connectivity and cloud computing is changing rapidly. Cisco has labeled the future of connectivity as the "Internet of Everything." What does this mean? The vast number of new devices hitting the marketplace and services offered are pushing cloud technology to the limits of its capability, and in order to keep up with this future "Internet of Everything," companies need products like Cisco’s UCS M-Series Modular servers to keep pace.

On any given day, there are people riding public buses to work accessing presentation files. At the same time, individuals are using their smartphones as they walk to work, responding to emails. Add to that the increasing number of videos being accessed and you have an Internet environment that is processing and transmitting untold amounts of data.

In order for business IT infrastructures to keep up with the demand of data-hungry consumers, innovation is needed to ensure that people can access the files, applications and software programs that they want and need – via the cloud.

Cisco’s new UCS M-Series Modular Server represents cutting edge innovation that is needed to continue providing consumers with the access and performance they expect from cloud applications. Traditional servers maintain direct connections between the CPU, Memory, Hard Drives and Networking within the server. Cisco has decided to do things differently.

The M-Series servers separate the CPU and memory from other subsystems that constitute the server infrastructure. These sub-components include system features like power, cooling, I/O, hard drives and management systems. The subsystems have been moved to the infrastructure side allowing them to be shared across multiple nodes.  These new servers allow companies to scale the compute resources as needed, independently from the sub-components.

This separation or modularity allows your business to deal with the varying lifecycles of processors, networking speeds, hard drive technologies and other components individually. For example, when a new processor line is released that has twice as many cores, it can be replaced at a lower cost by purchasing a new computing cartridge without needing to replace the entire server.

On top of those benefits, the groundbreaking design of the M-Series servers features a dense, modular, power-efficient platform that positions businesses to meet the needs of employees now and in the future. Your company can now make small-scale, incremental changes that increase performance and availability of the network without time-consuming disruptions or costly improvements.

Cisco touts its new UCS System Link Technology as being the true innovation on the new servers. Cisco’s Unified Computing System (UCS) was revealed five years ago to address the virtualization, automation and orchestration needs of business customers as they migrated to the cloud.

With the help of UCS System Link Technology, businesses are better prepared to connect critical subsystems to enhance services and availability. M-Series use this technology to deliver resources on the network at a hardware level. The M-Series servers create an infrastructure that is more efficient and agile. They are capable of powering the new class of cloud applications and allocating resources as needed.

What Does it Mean for Your Business?

The new Cisco UCS M-Series Modular servers make it easier for your business to continue offering efficient and reliable access to cloud applications in a package that is more affordable and easier to scale. The modular design of M-Series servers makes it easier to scale your network in small, discreet steps that do not impact productivity and availability. More importantly, with UCS System Link Technology, hardware resources can be used wisely across your network to meet demands when and where they are needed.

For the consumers of your applications, the M-Series Modular servers mean that expectations of cloud services can continue to rise. With these innovative new servers, your business will be able to answer demand and adapt to increasing demand in the future.

For more information about Cisco’s new servers, request to talk with a specialist.