Before we hired Chris Pudenz as Marco’s Chief Financial Officer last year, I didn’t realize we needed him because Marco was performing so well. However, as we grew and were purchased by Norwest Equity Partners (NEP), the complexity of our financial landscape increased. 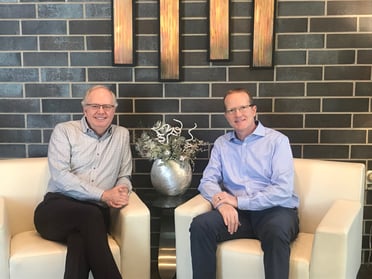 Our reporting and accountability had reached a new level and became a bigger job. So, with some coaching from my boss, we looked for a person to fill our growing financial focus and allow our then CFO, Jennifer Mrozek, the ability to execute on another important strategic part of our business that she knew well—acquisitions and integration.

It’s hard to be the new person to a leadership team—especially when the other members have been working together for decades. It takes a leader who has confidence and competence, but can humbly ease into the role despite a list of strong credentials.

We found that leader in Chris Pudenz. Before joining Marco, Chris served as executive vice president and CFO of ABRA Auto Body & Glass. He led all finance, procurement and legal functions for the $900-million business and was recognized for his accomplishments, including being named CFO of the Year in 2015 by Minneapolis/St. Paul Business Journal.

Chris could have easily jumped into his new role at Marco, starting to tell us what to do better. But he didn’t walk in with an agenda. Recognizing himself as the “new guy,” he made it a priority to “fit in” and really understand us before making any moves.

That in itself earned him respect. Here’s what else made Chris a leader worth following:

When you work with the same leadership team for a long time, it can be challenging to add a new team member. But, I really couldn’t be more pleased with how things worked out for Marco with the addition of Chris. With his leadership this past year, we have become a better organization.

Some of the most effective leaders are the ones who are humbly working at the top—earning respect and trust one step at a time. Chris is definitely one of those guys.