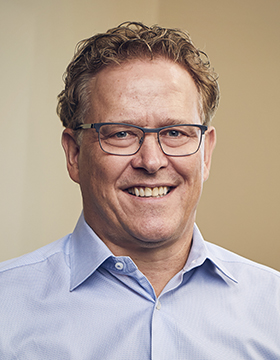 If Scott could trade places with anyone for a week, he would choose Bruce Springsteen. Even though fans don’t scream for him daily, Scott is popular at Marco for his genuine, sincere personality and passion for continuous improvement.

Scott has been Vice President of Operations at Marco since 2009 and has played an integral role in Marco’s development and implementation of lean process improvement practices.

He joined Marco in 1998 as Operations Manager for the IT Division. In 2000, Scott was named Operations Manager and led the Document Solutions and Office Furniture divisions as well. Prior to Marco, he worked for Kendeco Industrial Supply for 16 years, serving in roles in distribution, inside sales, purchasing, continuous improvement and operations management.

Scott always wanted to be Club Golf Pro. His dream someday is to work at his brother’s pro shop in Florida. Sounds like a hole-in-one plan! If Scott’s life was a book, the title would be Golf Connections, as he fosters many relationships through golf.

Other fun facts about Scott? He enjoys completing the People magazine crossword puzzle each week. He would pick ending all wars as his super power (he’s naturally a peaceful guy), and his family and faith inspire him every day.

He is active in Junior Achievement, United Way and St. Cloud Sertoma. He also serves as a committee member for the Digital Gateway e-Automate Software User Group and is active at Saint Paul’s Church. Scott volunteers for CentraCare Health Foundation and leads the Jackson Roeder Memorial Fund, which supports the implementation of the Zero Suicide model within the CentraCare health system.