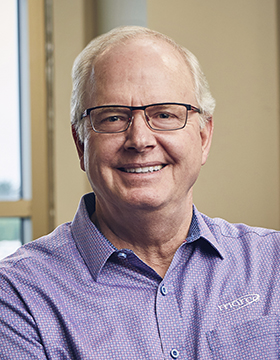 Jeff joined the U.S. Air Force out of high school, where he received a series of prestigious promotions. Afterward, he graduated from the University of North Dakota in three years and immediately took his charismatic leadership and relentless work ethic to his first sales position at Marco.

Since taking the helm at Marco, Jeff has led the company through aggressive growth and opportunities. He has transformed what started as a small typewriter dealer in 1973 into a rapidly growing technology company with offices located nationally. He believes in high performance, sustaining a fun workplace and keeping score.

If Jeff could choose a super power, he would read minds. It would make the many negotiations he gets involved in much easier. However, Jeff is naturally attuned to others and wisely executes on decisions. Known for his friendly personality, he feels inspired by building a great place to work, supporting company growth and delivering client satisfaction.

Jeff was named a Most Admired CEO by Minneapolis/St. Paul Business Journal in 2016 and recognized as an EY (Ernst & Young) Entrepreneur of the Year for the Upper Midwest in 2015. He was even named one of the 100 People to Know by Twin Cities Business Magazine in 2017. So does he have trophies? You bet!

Fun facts about Jeff? He likes working out, family time, golf, traveling, and classic Mustangs—the 0 to 60 in a blink kind.

In the book Looking Out for #2, author Bruce Miles writes: “Spend some time with Jeff and it’s clear that Jeff has a presence about him. His spirit is engaging and his leadership is inspiring. He’s honest, genuine and not afraid to expose his faults. When he walks into a meeting, people notice. But it’s not because he holds the title of CEO. It’s because he knows how to listen, quickly build consensus and, when needed, make the hard decisions.”